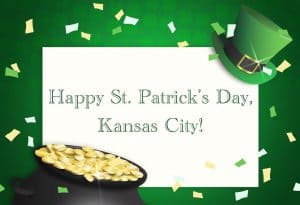 UPDATE: A number of previously scheduled events have been canceled or postponed due to public health concerns. Take a look because there are still a some things happening around town.

You don’t need to rely on the luck of the Irish to find free and cheap fun in Kansas City for St. Patrick’s Day.

There are plenty of Kansas City St. Patrick’s Day parades, parties and other events happening in mid-March. Whether you’re looking for green libations, family-friendly parades or St. Patrick’s Day-themed treats, we’ve got a list of ways you can celebrate your true or pseudo Irish heritage that will keep your pockets heavy (with cash) and your heart light.

We’re busy as leprechauns on Monday pulling together our list so check back often for updates. If you see something we’ve missed, drop us a note at news@kansascityonthecheap.com.

We’ll make this easy for you. All the parades are cancelled. Skip on down to the other section. In some cases, bars, restaurants and retailers are still doing something even if a previously scheduled parade isn’t taking place.

Parades are one of the most popular St. Patrick’s Day celebrations in Kansas City. Revelers and marchers fill the streets for several different parades around the city.

CANCELED: Brookside Warm Up Parade: We’re not sure why anyone in Kansas City needs a warm up to St. Patrick’s Day, but may you walk in the sunshine and enjoy this Brookside neighborhood tradition Saturday, March 14.

CANCELED: Belton St. Patrick’s Day Parade: Downtown Belton gets into the Irish spirit with a celebration on Saturday, March 14.

CANCELED – Kansas City St. Patrick’s Day Parade: Kansas City is having quite a run with parades this year. Join the celebration in midtown KC on Tuesday, March 17.

Eat, Drink and Be Irish in Kansas City at these St. Patrick’s Day Celebrations

A merry mood fills Kansas City for St. Patrick’s Day and you won’t have to look too far to find watering holes and restaurants with green beer, themed cocktails and pub food to soak it all up. We’ve included a list of Irish standbys, as well as anywhere else offering a deal. After all, the only green you want to be spreading around for St. Patrick’s Day is that of a four-leaf clover.

Applebee’s: It doesn’t matter if you’re drinking on March 17 or not. Applebee’s has Long Island Iced Teas on special for $1 each and every day in March.

The Brewkery: Breakfast is the most important meal of the day so enjoy house-made biscuits and gravy at The Brewkery along with drink specials on Saturday, March 14. Open from 9 a.m. to 5 p..

Casual Animal Brewing Co.: Beginning Saturday, March 14 at 11 a.m., there’s a Casual Snake Saturday chill out with a new batch of Branch out Nitro Stout. Drinkers get a FREE bowl of Lucky Charms (while supplies last) with their first beer purchased.

Cinder Block Brewery: Be here Saturday, March 14. Doors open at 11 a.m. Irish beer brats are on the menu along with specials for Jameson, Baileys and Irish car bombs. Don’t forget $7 for a souvenir cup.

Kelly’s Westport Inn: We’re pretty sure there’s a law that says you must at least walk by Kelly’s in Westport. If you’re lucky enough to find a seat or belly up to the bar, you’re golden.

CANCELED: Knuckleheads Saloon: Don’t let the end of the parade in Westport stop your St. Patrick’s Day revelry. Knuckleheads has live music that on Tuesday, March 17 with tickets for $10.

The Dubliner: This Dublin-style bar is located in the Power & Light District.

McGuire’s Tavern: In the past this family owned and operated Irish bar near Downtown Overland Park has opened early for St. Patrick’s Day and served breakfast and drink specials.

O’Dowd’s Gastrobar: Start with breakfast at 7 a.m. on Tuesday, March 17 at O’Dowd’s on the Country Club Plaza. Keep going with live music, bagpipers and giveaways.

O’Malley’s Pub: If you find yourself in Weston, the only real place to celebrate St. Patrick’s Day is at O’Malley’s Pub. Of course, they have celebrations on Friday, March 13, Saturday, March 14 and Tuesday, March 17.

Snake Saturday at the Iron District: Several businesses and vendors plan to be open Saturday, March 14. Hours will vary by individual business but you can probably expect something to be open from 9 a.m. to 2 p.m.

Snake Saturday in Northtown: Some North Kansas City bars and restaurants are still welcoming Irish revelers Saturday, March 14 even though the Snake Saturday Parade is called off. Have breakfast, lunch, drinks, live music and more.

Stone Pillar Vineyard & Winery: The festive Irish in Johnson County can indulge in $6 Shamrock Slushies at this Olathe winery on Sunday, March 15 from noon to 3 p.m. They’re also offering a chance to win a $50 gift card.

Treats Unleashed: Stop by Treats Uleashed in Leawood between 11 a.m. and 2 p.m. on Saturday, March 14 to get your pup a FREE St. Pet-rick’s Popsicle.

Westport Flea Market: This local favorite is offering its traditional Eggs and Kegs (all-you-can-eat breakfast and beer) for $12 on St. Patrick’s Day from 7 to 10 a.m. They’re also bringing back the incredibly popular $1.69 burger deal they offered after the 2020 AFC Championship win. The burger deal is available all day on March 17.

CANCELED: KCK Public Library St. Patrick’s Day Crafts: Kids can get crafty Monday, March 16 at the Turner community Library. Registration required. NOTE: You can stop by to pick up a package of the craft supplies and make the project at home.

CANCELED: Chicken N Pickle: This North KC bar is the place to be for Snake Saturday Saturday, March 14.

Irish WinterFest: There’s no need to wait until March for St. Patrick’s Day celebrations when you can enjoy the 9th annual Irish WinterFest hosted by the Kansas City Irish Center the weekend of Feb. 28-29.