← Sweets, Drinks and Shopping for Galentines Gathering
Pickleball and Other Fun at Chicken N Pickle →

Starting Oct. 24, 2019 visitors to Union Station can explore the culture, conquests and heritage of the greatest conqueror the world has ever known when Genghis Khan: Bringing the Legend to Life opens at Union Station for an exclusive and limited-time showing.

Presented in Kansas City for the first time, this world tour exhibit features more than 300 spectacular objects, including rare and sophisticated weapons and a formidable array of swords, bows, arrows, saddles and armor. Costumes, jewels, ornaments, instruments and other fascinating relics create a complete image of the legendary leader. In total, these priceless original artifacts from Genghis Khan’s 13th century Empire form the largest such collection to tour.

Kansas City on the Cheap had the chance to view the exhibit in early November. The artifacts and historical notes were interesting, as we expected, but the exhibit showed another side of Genghis Khan. It was surprising to learn that this figure with a fierce reputation was also a loyal leader who advocated for religious freedom, fair taxation, open trade and appreciation of the arts. Genghis Khan also advanced his empire by developing a written language, managing rapid methods of communication across great distances and choosing individuals for government positions based on their capabilities and not birthright.

Other highlights that make Genghis Khan more than an ordinary exhibit include: 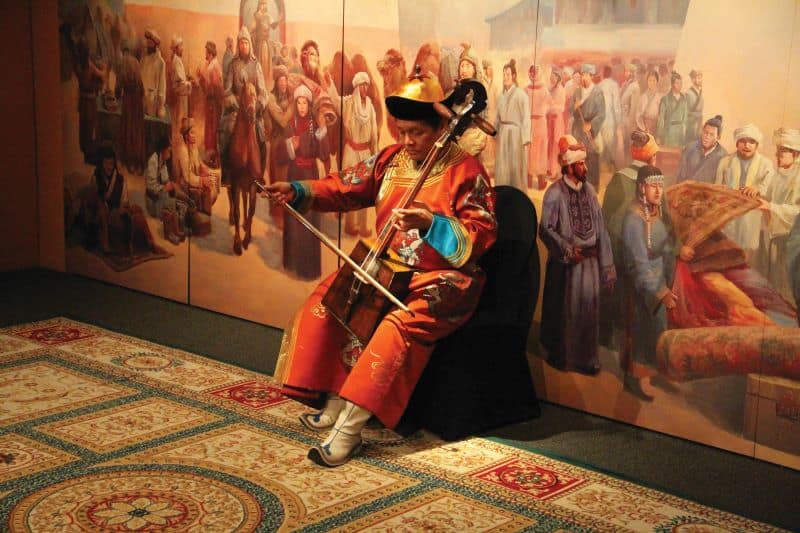 General admission: Tickets are $17.95 for adults, $14.95 for kids. Union Station member admission is $12.95. An additional $1.25 preservation fee is added onto the price of each admission to help preserve Union Station’s historic structure.

Combo offer: Enjoy two great experiences in one day. When you purchase a Genghis Khan ticket you can add a Science City visit for an additional $8. That’s a little more than $5 off Science City’s general admission price.

The last tickets of the day are sold one hour before the exhibit closes.

Parking is available in two nearby lots and a parking garage. Rates range from $5-$15. You can also ride the KC Streetcar. There’s a stop right out front of Union Station.