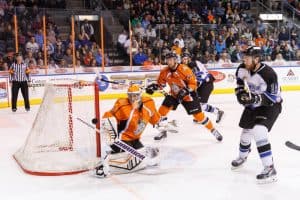 Looking for ideas for a fun date night or family night? Hockey games are a blast! The Kansas City Mavericks, who play at the Silverstein Eye Centers Arena, have many home games left this season. Tickets start at $16.

Discounted tickets can be purchased for Tuesday or Friday games:

Other ticket offers can be found here.