Freddy’s Frozen Custard & Steakburgers has a Veterans Day deal that military heroes can use anytime during the month of November. 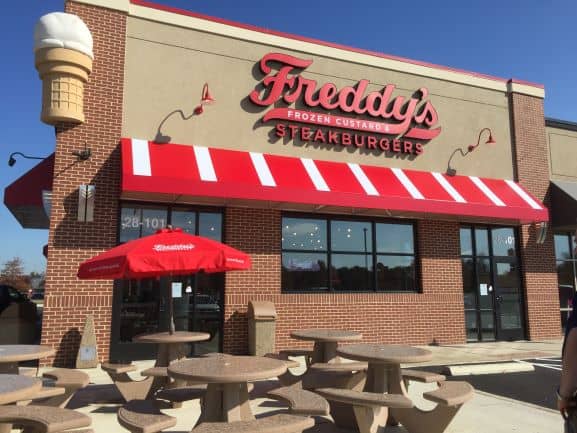 The restaurant chain is giving out meal cards for a FREE Original Double combo meal to any Veteran or active-duty military personnel who visits a Freddy’s restaurant on Friday, November 11.

No purchase is necessary to receive or redeem the meal card.

The meal card is good at any participating Freddy’s location from November 11-30, 2022.

Once you’ve collected your FREE Freddy’s combo meal card, be sure to take part in these other Veterans Day offers and events happening in Kansas City.

Freddy’s has more than 350 restaurants in 32 states across the nation so it shouldn’t be hard to find one, no matter where you happen to be.

Did you know this steak burger and frozen custard chain has a Kansas connection? Freddy’s Frozen Custard was founded and remains headquartered in Wichita. The first restaurant opened there in 2002.

According to the company’s Facebook page, Freddy grew up on a farm near Colwich, Kansas. He joined the U.S. Army infantry in 1943 and was assigned to the 1st Cavalry Division. While serving in the Pacific during World War II, Freddy earned the Purple Heart for injuries sustained, as well as a Bronze Star for valor and was awarded other ribbons and medals for his service to his country